CHERYL'S MEMORIAL - A Celebration of All Things Cheryl

Cheryl left me strict instructions on the form and content of the celebration and I am pleased to say we have booked a time and place. October 7 at 2:00 PM at Metro Theatre. With drinks to follow in the Metro Lounge. Cheryl left lots of details as to the form and content of the show - yes she used the word show - and I will be contacting some of you and asking you to perform or to help in other essential ways. Shelley Hunt, Kerry O'Donovan and Melanie Thompson are doing this with me and Emma Hale at Infinity Films will be coordinating us all.

I hope you can all be there - we intend to raise the roof of Metro Theatre all the way to the blue skies above through the sheer volume of joy and laughter in her memory. And in the sure knowledge that her spirit will be with us that day and every day.

I hope you can join us! More details to follow but mark the date in your devices.

Alison wrote this beautiful piece to be published in the next Metro program at the end of August. It will be accompanied by the lovely photo taken by Scott Ashton Swan.
________________ 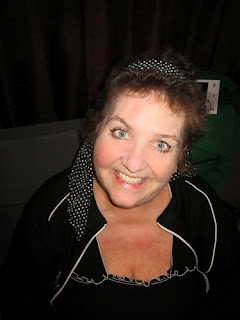 In early July the theatre community of Vancouver lost a much loved friend. Cheryl passed away peacefully after a valiant six year battle with cancer. This remarkable lady packed so much into her life.

During the day she worked for the Provincial Government as a Systems Analyst – travelling around the Province to train others. As if that wasn’t enough to keep her busy, she spent countless hours volunteering in the theatre community.

From an early age, she was involved with Metro and over the years she was on the board, produced many shows, stage crewed several and played the role of Mrs. Holley in a 1981 production of The Bed Before Yesterday. For some 20 years she also ran the Metro box office, driving from the West End every night of performances to cheerily greet patrons at the window. Initially she was accompanied by her faithful dog Jericho, and later by her “box office dog” Bridget, who delighted many patrons by pushing out her cute nose looking for some affection.

When the journey became too much, Cheryl volunteered for several summers at TUTS – helping to organize the box office and helping in the office. Always generous with her time and talents, she helped many other smaller theatre groups, and, unbeknownst to many, also spent many Decembers answering children’s letters to Santa. Cheryl set up the Metro website before most other groups had even thought about it, and ran it at no cost until quite recently. She also acted as Metro’s Publicist during the last few years.

Theatre – especially musical theatre – was Cheryl’s great love and passion, and the crowning glory for Cheryl came last year when she was surprised at the Jessies to be presented with the Mary Phillips Award for meritorious service to the theatre community.

Her positive attitude and constant cheerfulness in the face of everything life threw at her remains an inspiration to all of us who knew and loved her. A more fun loving, kind, intelligent and generous person would be hard to find and we will surely miss that bright smile and wicked sense of humour.

Cheryl's obituary - published in today's Vancouver Sun and tomorrow's Province. Thank you Mark Robins for what must have been a difficult task ♥

It's easier to read it here at legacy.com

Posted by Unknown No comments:

Melinda here... Plans for Cheryl's celebration are underway. Please check here and her Facebook regularly for this special date announcement.
Posted by Unknown No comments:

A Scholarship in Cheryl's Name

Update from Steve... Cheryl had requested in her will that in lieu of flowers, donations should be sent to Applause Musicals Society to set up a scholarship in her name. If you would like to make a donation in her name you can go to the Applause Musicals sites - http://applausemusicals.com/pb/wp_99667909/wp_99667909.html. Or on Facebook - https://www.facebook.com/pages/Applause-Musicals-Society/114991148555054. At either of these sites you will be able to donate. As per Cheryl, this annual award will go to a deserving student in a post secondary theater program to assist with payment of voice, dance, or acting coaching.
Posted by Unknown No comments:

Condolences to the Family

Melinda here... For those wishing to send condolences to Dad Bill and family, here's Bill's address. Any cards of sympathy will be appreciated and will be shared with her three siblings.

I'll be posting details on the celebration event as soon as I have them. Thank you to all for your continued support and outpouring of love. Bill is speechless and so very very proud of his Cheryl. <3
Posted by Unknown 1 comment:

Dad Bill has just informed me that "Our dear Cheryl passed away at 11:20 am PST. It was a very peaceful passing as she just left us in her sleep." More later on celebrating the life of this truly wonderful woman. God bless you all ♥ - Melinda
Posted by Unknown 87 comments: